Baby, Won't You Take Me On A DCL Cruise?

For those of you who like my Facebook page, Jenn Jess at Mad Hatter Adventures, you saw my posts about our cruise on the Disney Dream to Nassau and Castaway Cay.  I’d like to expand on the information I posted because a cruise is a different kind of vacation with special experiences and challenges and a few Facebook posts just don’t cut it.

We actually had a Land and Sea Adventure, which I highly recommend. We chose the land portion first, staying at Old Key West on Disney property for a few nights before heading onto the Disney Dream.  This was the perfect way for us to lengthen our vacation because the cruise was only Friday to Monday (I’ll get to THAT in a minute).

After a few days in the World, it was time to cruise.  First off, transportation is not included in the cruise price.  One mistake is thinking that if you are staying on property, Disney transportation is included to port.  WRONG!  Fortunately, there are many options in getting to port.  You can get Uber or one of many transportation options like Mears.  We chose to take Disney transportation for the simple reason that it if you use them, they pick up your luggage from your room and you don’t see it again until you get to your cabin on the cruise.    We enjoyed that because it was one less thing to worry about.  The cost was $78 round trip per person. It took us from Old Key West to Port Canaveral and then to Orlando International Airport. If you do choose Disney transportation, you may get to port later than choosing another option because you do not get to choose what time the bus picks you up. You get a letter in your room the night before the cruise telling you what time the bus will arrive.  We didn’t arrive until after 2:00.  At first, this was very disappointing because we wanted every available minute on the ship.  However, after speaking with the cast member who checked us in, she said later is better because the port is mobbed with 1,000 people arriving early and wanting to get on board.  So, after weighing the late arrival with the emptiness of the port when we arrived, we were very happy with our decision. Like the luggage, it’s a personal preference.

If you park at Port Canaveral, it's between $60-$120, depending on the length of the cruise. You can pay at the gate or online. Private transportation is available as well and prices vary based on how many people are traveling and what vehicle you choose to take.

After check in at the port terminal, which only took a few minutes because there was no line, it was time to embark! I am not ashamed to admit that I was overcome with emotion upon boarding.  When we walked on board and our name was announced and we were welcomed onto the Dream, I started crying.  It was a mixture of excitement, anticipation and thankfulness that life had gotten us to that moment.

Captain Donald greets guests who are sailing on The Dream

So, after I pulled myself together, we walked around taking pictures and trying to get acclimated.  The Dream is enormous and we needed time to get situated.

Our cabin was ready and our bags, as promised, were waiting for us in the hall. Let me start by saying that the cabin on the Disney Cruise Lines are substantially bigger than other cruise lines. DCL offers a split bathroom, which makes getting ready so much easier. One room has the toilet and sink and the other has the shower/bathtub and sink. It is a lifesaver when everyone is trying to get ready at the same time, whether it’s for dinner or to make your excursion in the morning.

This magnet was greeting us when we arrived at our cabin. We felt so special - and HOME!
Plenty of room to spread out - queen sized bed, couch and a Murphy bed next to the porthole

As we opened the door, the bathrooms were to the right and the closets, which included a safe, were to the left.  The way the space was utilized was fabulous.  There were ample shelves and hanging space for clothes.  The safe was more than adequate for passports, wallets and small electronics.  There was a queen sized bed with bed side shelves.  Our luggage fit neatly underneath.  A wall-mounted television and wall of dressers with a mirror were on the left, with a sofa on the opposite wall.  There was a coffee table that opened up and served as more storage.  However, my favorite feature was the murphy bed which pulled down fit up against the porthole.   There is no better way to wake up then to open your eyes and look out onto open water.  Another neat feature was the curtain which could be pulled in between the queen sized bed and the couch.  When pulled, it made the bed area feel more like a separate bedroom.

After exploring our cabin, we headed up to Cabanas for a quick bite. It is like a food court, with different options like pizza and sandwiches. And of course, the bar was open, so we had a little adult vacation beverage. There was also a fun Bon Voyage party with singing and dancing, so we spent a little time enjoying that.

Before we knew it we had to get ready for dinner. DCL has something called rotational dining. Each night of the cruise you eat at a different themed restaurant. Your dining crew travels with you each night, so you develop a rapport with them and vice versa. There are also 2 seatings for dinner. We chose the first seating because we usually eat early. We were seated at 5:45. The second seating was 8:30, which is a little late for us. However, you choose and the late seating may be perfect for you! 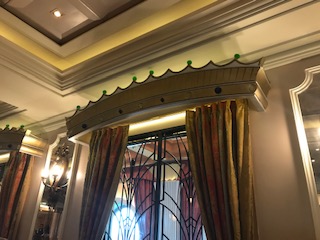 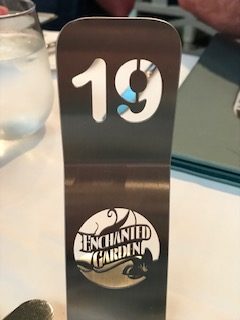 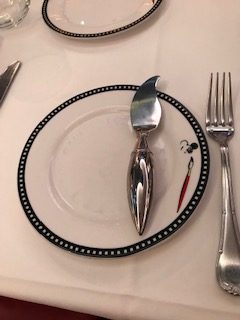 We thoroughly enjoyed every meal! The food was great and the staff was nothing less than exceptional. They kept kids and adults happy, which can be hard to do.

Our first morning was the port of Nassau. Our excursion was snorkeling and a catamaran ride. The company who ran the excursion was great and they made it fun for everyone while still keeping us safe.

The second day was a stop at Castaway Cay, Disney's private island. I think I could have stayed there forever. Joe and I stared the day off with the Castaway Cay 5k, which we had signed up for as soon as we boarded the ship so we could get a spot. Just a warning, even in April it was incredibly hot and humid. Part of the course is on a straight piece of asphalt called the Landing Strip. STAY HYDRATED. The heat and humidity was not fun and although a lot of people walked it, I wouldn't recommend it if you overheat easily.

Once we had sufficiently exhausted ourselves, we were ready to relax. The water, although a tad bit chilly in April, was crystal clear. The beach was clean and even though there were tons of people around, there seemed to be enough beach chairs and lounging areas for everyone.

Lunch was provided and is part of the cruise price. The huge open area buffet had 2 different locations to help ease the crowds. There were burgers, chicken, corn and lots of other options. The ice cream was the biggest hit with the kids ( and the birds who were opportunistic with the dropped cones).

Cast members waving goodbye at Castaway Cay. They were all wearing Mickey hands!!

Unfortunately, the next morning was time to disembark. They made the process as easy, if not as much fun, as embarking. Here comes the second thing that may make you think about Disney transportation - they pick up your bags at 10:00 pm the night before, so you have to be ready and well organized for what you need the next day. We were heading right to the airport, so we needed everything for the flight home. It wasn't a deal breaker for us, but it's something that is nice to know so you can prepare.

So, my overall thoughts about this cruise. 1. It was amazing! We traveled with great friends and for us that made a huge difference. The kids got to hang together at the tween and kids club and the adults were able to enjoy adult time. We also had a lot of great family time together. 2.This cruise was definitely not long enough. We embarked Friday afternoon and disembarked Monday morning. That was barely time to get our sea legs. With the excursions both days off the ship, we really only had a few hours to explore in total. We watched the Beauty and the Beast stage show (a MUST see is at least one of these award-winning shows) and shopped a little each evening. Joe and I went up to the adult-only deck for a drink outside and to enjoy the evening while waiting for our tween to be done being social at the club. 3. We are looking forward to our next cruise adventure - stay tuned!!

I would love to hear about your cruise thoughts or questions. What is your favorite part of a Disney Cruise - or any cruise?

So This Is Love